Nmap Tutorial For Beginners Guide, learn from basics to advanced 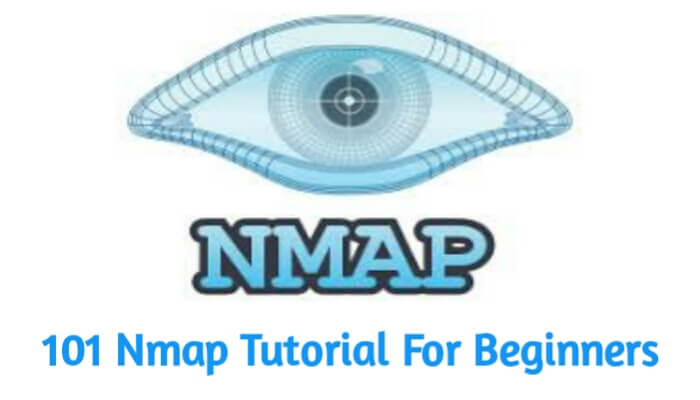 Nmap is the most used tool for all types of hackers, especially the White Hat and System Administrators,

Nmap comes with many built-in scripts for various scans, that's why it became one of the popular hacking tools for hackers,

In this Nmap tutorial am going to tell you a short but effective tutorial on how to use Nmap and tell you the advanced Scanning Techniques that are not even told by many other Hackers.😇

Before we start you must have basic knowledge of IP/Networking and Nmap, if not then no need to worry I will try my best to explain more about Nmap Tool,


So in this post, I will be covering these

In simple words, Nmap is a Network Mapper, a free and open-source tool that comes with GUI and Command-line interface, and mostly used by IT Professionals to scan enterprise networks, so Nmap helps look for live hosts, specific services, or operating systems.

How To Install Nmap

The Installation of Nmap is depended on your Operating System, in Linux it can be installed with a simple command,
however we are skipping the installation guide as the installation process can be found on the official Nmap documentation,
the interesting thing is you can install Nmap on Android too, we have already published a tutorial on our blog, you can read it here,

As I told you at the beginning of this tutorial, Nmap is a Network Mapper which helps us to scan a network/host and detect its open ports, closes ports, check a host is up or not and finally detecting the operating system the host is running and so on. this nmap tutorial will be little bit longer as we have tried to cover a lot

Before we start using Nmap, you must have basic knowledge of Networking,

a port is basically a way to connecting to a computer, there are over 65353 ports that can be open, closed and filtered

if the port is filtered then it is likely to be open or close and you should know that the system administrator hiding some sort of information.

these are the most commonly used protocols over a network. However these are used for listening for a connection, they play different roles
as

TCP Protocol
It is a Connection-oriented protocol, in simple words it is used for connections that need things to be ordered specifically, for example, loading a web page.

UDP Protocol
UDP Protocols are Connectionless protocol that doesn't assure the delivery of packets at the end, the most commonly used for Live Video Transforming.

Here is a quick overview of various types of Protocols

Now Let's use some Nmap commands for Port Scanning.


Tip:
In This Tutorial, we are using Nmap in Linux,
Although Port Scanning Is Not Crime as per Shodan,

in this post, we will be using the host https://scanme.nmap.org for scanning, which is permitted by Official Nmap.

Before Performing Scanning through Nmap, you have to know the Different Scannings types.

Since we are using Nmap In a Linux Command Line Interface, so we just have to know the Nmap Commands,
you can get a list of commands with their uses by typing Nmap -h
It will print the help menu so that you can easily understand The Nmap Commands. 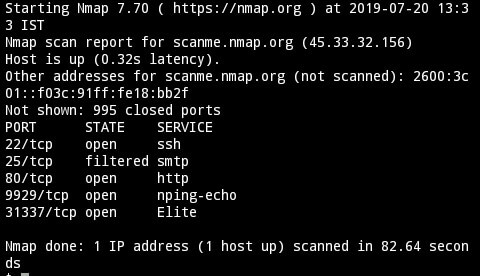 after executing the command you will see the results in real-time, it will show us the open ports, closed ports, filtered and even more.

To scan targets from a list the below command is used


Where targets.txt contains the targets

Sometimes we have to face a situation that we cannot determine which software is running on which version of the software.

for that we have to do a service version scanning, it can be done very simply by adding a flag


it will output all the info regarding to the software versions along with ports,


Note:
However 65,535 ports can be open or closed but remember Nmap will scan only the top 1000 common ports only, for that, we will be covering some advanced scanning techniques, so keep reading.

Sometimes Logging the Nmap scans is extremely useful when you're scanning a large network, it can be done by using the flag -oA logfile-name
Nmap usually supports three types of logging usually (.nmap, .gnmap, .xml)
The log files can be accessible in the command line also, just type ls and you will see the list of log files and
type cat logfilename.nmap to read it
Nmap command for logging scans

As we told you in the beginning that Nmap will scan only the top 1000 ports in a normal scan, we can set a range of scans or scan a specific port.

To Scan a Single port then it can be done by using the flag -p
Command: Nmap -p 21 scanme.nmap.org

It will scan only the FTP port and shows the port state.

Scan The Common Ports Fast
Nmap -F scanme.nmap.org
It will scan for the most common ports fast.

we will discuss more in the advanced scanning section.

Note:
However we did a small recap on Nmap but it takes time to be a master of Nmap,
If you still looking for Nmap commands then check out the Nmap manual by typing man Nmap on the command line or you can read it online here

Now it's time to go with advanced scanning techniques, where you will find everything interesting.

SYN SCAN: This is the default scan by Nmap, in this type of scan Nmap Sends TCP SYN packets to each possible port. If it gets an SYN ACK packet back, then Nmap knows there is a service running there else it shows the port is closed.

TCP Connect: it works the same as SYN scan but it makes a full TCP connection, sometimes its results are more accurate than SYN scan.

Ping Sweep: This is a simple scan that Pings all the addresses to see which are responding to ICMP packets, however, this scan is not so accurate if the target machine is configured not to respond to a ping request.

UDP Scan: This scan is quite slow, and used to check whether any UPD ports are listening for a connection,

FIN Scan: It is just like an SYN scan but it sends a TCP FIN packet,

NULL Scan: This Scan Sets the TCP headers to null, this scan is helpful when the target is a non-Windows server and Protected by a firewall.

XMAS Scan: This Scan is Similar To Null Scan but it turns on the TCP Headers,

RPC Scan: This Scan Looks for machines that respond to Remote Commands,

Windows Scan: This type of scan is performed on Operating Systems if the ports supposed to be filtered.

Idle scan: This scan is performed if there the packets to the host is bounced off to an IP that you don't have control of it, this scan often used for malicious attacks,

Hope you guys gained some basic knowledge on How Nmap Scans works and the different types of Scans, Now let's see the Advanced Scanning Techniques

Before we start scanning the network we have to know whether the host is up or not. Nmap has several ways to detect
So let's see how to detect

Ping Sweep: Pinging is the most common method for detecting a host is up or not,

However, Nmap has a feature to do ping sweep against a host, the below command is used to perform ping sweep host detection.

The flag -sn is used for ping sweep host detection.

Another thing is if you're scanning an SSL supported host then the flag -PS 443
is extremely useful for host detection.

As we told you earlier that UDP protocols are connectionless, and it takes a little bit longer time to scan,
While scanning for UDP forts the flag -sU is used, moreover, it requires Root Privileges so sudo is a must

The concept behind running these scans is that a closed port will attempt
to reset the connection by issuing an RST (reset) packet,

Note that FIN, Xmas,
and NULL scans are known to not work against Microsoft Windows hosts.

Sometimes we have to know which operating system the machine is running on, targets often run on multiple operating systems, however, Nmap can easily identify them.
the flag -O is used to detect Target Os


By executing the command we will see the Operating System, MAC address(if we scan a LAN network), & OS CPE

Verbose Scanning is used to retrieve information quickly while a scan is running, there are different levels of verbose scanning,

-v Flag is Used For Verbose Scanning, and -vv Flag is the second level of verbose scanning and the final is -vvv Flag For High level verbose,
you can also use the --reduce-verbosity flag to reduce verbosity

This Technique is used to understand the network hops that occur between hosts and to see the actual network traffic passing through.

This is also possible by using the flags traceroute and tcpdump but it is time-consuming.

so the flag --packet-trace is used for Packet Tracing

We have already learnt how to scan using various techniques, but most of the time Nmap takes a longer time to scan, to reduce the scanning time let's learn how to use the advanced flags.

To Make Scans Faster Nmap has some Flags -T1 to -T5, T1 is slower and T5 is higher, while the default is -T3

Timing Optimization is useful for quickly scanning a large network.

Nmap uses a Group of hosts to scan the hosts efficiently,

You have to know how to customize host group size, however, there are flags used to increase or decrease parallelism in full scans, which helps Nmap to finish the scanning effectively.

So Far... We have Learnt How To Use Nmap for Port Scanning along With Advanced Nmap Commands

In This Section, let's see how we can use The Nmap Script Engine to conduct reconnaissance scans.

Nmap Script Engine is Basically a Framework that runs in the programming language Lua, and on other hands Nmap script engine is a collection of scripts that are specifically coded for a purpose, to use the scripts we have to use the --scripts flag.

Although The Scripts are Prepacked on your system the problem is you don't know which scripts to use,
We strongly recommend you to read the Official NSE Doc By Nmap

The Nmap Scripts are basically categorised into the following

once the scripts database is updated then its time to use them
to use Nmap scripts --script script-name command is used,

Now its easier to run categorised Nmap scripts at once, below is a simple command for default scan with Nmap scripts

If you want to scans by category or categories is too much, you can select scans by their specific name, or use wildcards. For example, if I wanted to scan a web server and load all the HTTP modules in the default scan repository, I would scan with the
--script "http-*" flag


😔 The Nmap Script Repository is quiet though, so it's better to do a little bit of practice, moreover, some security researchers develop their own scripts, keep updated with their scripts.
And therefore Nmap also can be integrated with Metasploit, Ncrack and many other Popular Framework,

Although this is a Beginner Nmap Tutorial, we tried our best to explain still if you feel anything missed out then feel free to comment, so that in our next update we will include that,

Thanks For Reading, Share this tutorial with your friends or forums and tell them that you learnt something better.
Hi, am Basudev From Andhra Pradesh, India. a Blogger & Hacker Interested in Infosec, Web Development, Programming